Act I Heart of Darkness

“It started as a PSA, and then when I was on the streets with them, I knew I needed to do more,” Michael Leoni, writer and director of the film, American Street Kid, had told me over the phone. Though it was our first time speaking, our conversation had the taste of old friends reunited.

For the past 3 months, Joey had mentioned Michael’s name several times to connect with him. Joey, one of my soul mates of this life, had Facebook introduced us.

When Joey and I were still friends, he had mentioned to me how he was involved with a project where he messaged the homeless.

As our relationship evolved, I fell in love with him. I remember the exact moment. It was the way his eyes lit up while he was Reiki healing my mother. We’ve only met each other a few times, but after hearing the story of the stress my mother was going through, he offered to do pro bono work.

Sometimes I don’t understand why strangers can be so nice. But when they are nice and when they take the actions to demonstrate it, it changes your life.

I can see now how Michael and Joey became related. They were of the same spirit. They were both strange. They both did things that most of us wouldn’t do.

Joey was just a stranger, who did strange things.

Strange things like offer to help my mother when she was experiencing pain. We had only met once prior.

Strange things like take out his 401k and leave a 90k art director job so he can enroll in massage school, TRE, and Reiki so he can heal others.

Michael was just a stranger, who did strange things.

Strange things like taking them home to prevent them from getting jumped or raped, when he knows he’s crossing the professional line.

Strange things like booking hotels for them with his personal money just so they can have a bath, clean water, warmth for a few nights.

Strange things like driving them to transitional living, then when that system didn’t work, showing up to personally to read transformational books like The Four Agreements and The New Earth, so they can free themselves of the past that keeps them trapped in the vicious cycle.

Michael changed the lives of Ryan, Nessa, Ish, Kiki, Nick, Crystal, Greenz, Bubblez, and many others during the 6 years he was making this documentary. But he wasn’t making the documentary. He was making a difference and documenting it so he can show that even one person can make a world of a difference. Even if it does take 6 years.

If I knew it would take 6 years for me to fully launch The Love Story, a project that is committed to inspiring suicidal people to prevent other people from committing suicide, would I still do it?

Because I’m one of them.

So What Inspired You?

“So what inspired you to do this documentary?” I asked him.

“I was homeless at one time,” Michael said. “I wasn’t there for long thanks to my girlfriend and friends, but I could’ve easily been any one of these guys.”

Because he’s one of them. 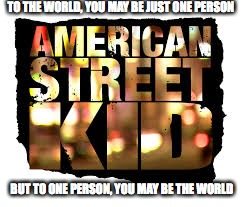 I don’t have to take on the whole world. I just have to change my perspective on how I matter to this world.